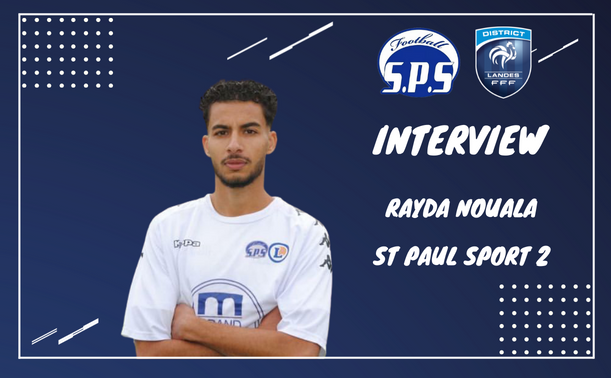 Focus – Saint Paul Sports Football: “We have to continue this momentum”

After a more than successful start to the season. The reserve of SPS football received its dolphin in the general classification, the reserve of Villenave for the account of the 7th day of the Regional 3.

Currently in full confidence, the group remains on five wins and a draw in six games.

Landes Football District offers an interview with the captain of the blue and white, Rayd NOUAL, for this game on Saturday. Maintenance.

Rayda NOUAL: “It is obvious that SPS football has high ambitions in the long and short term. Either at the level of the first team with a rise in the national 3 or the reserve team with a formation that must be able to follow at the highest level. »

You were already in the club last year. What do you think has changed this season?

Rayda NOUAL: “I would say that the arrival of new quality players allowed both teams to strengthen themselves in key positions. In addition, the experience gained during the past year allowed us to avoid repeating the same mistakes. »

This weekend you face an equally high performance team. Indeed, Villenave currently has the same number of points as you. Was the preparation different?

Rayda NOUAL: “I don’t think otherwise. We try to train well, seriously and intensively every week in order to be ready and efficient at the weekend. We approach this match very seriously and with a lot of desire! »

Finally, a ritual question, as the captain, do you have any words to convey to your teammates and fans?

Rayda NOUAL: “Simply thank the educators and the group who work hard and are 100% involved every week to succeed in achieving the goals set. We must continue in this dynamic of work and seriousness. »